Once upon a time I made a site called Triptrop – it made nice (and now very out-of-date) transit-time maps of the NYC subway. A million years later WNYC’s most excellent data news team came along and used all sorts of newfangled technical wizardry to produce a beautiful updated version called Transit Time NYC. Now all that’s old is new once again, and I’m standing on their shoulders to produce this map! So let’s do this:

While we adore public transportation in NYC, when was the last time you took the bus? If you’re like most New Yorkers, your first choice is usually the subway.

Just here for the map? Sneak ahead to the fun part.

Buses just can’t win because riding them is about a hundred times more complicated than taking the subway. Their routes are byzantine, their schedules confusing, and they don’t really shine in the whole inter-borough getting-to-work department.

It turns out buses are actually kind of awesome. Let’s look at some numbers.

Ten times as many lines! Three times as many miles! Stops on every few corners! The five boroughs are awash in buses. …but where can they take us?

If you’ve lived in New York for any amount of time, you probably have the subway map more or less internalized. It’s simple, sure, but it’s also everywhere. As one of the most fetishized piece of design in New York City, it has games and revamps and clothing and famous old versions.

Bus route maps, on the other hand, are a little less known and a little more complicated. Let’s take a look at Brooklyn’s bus routes. 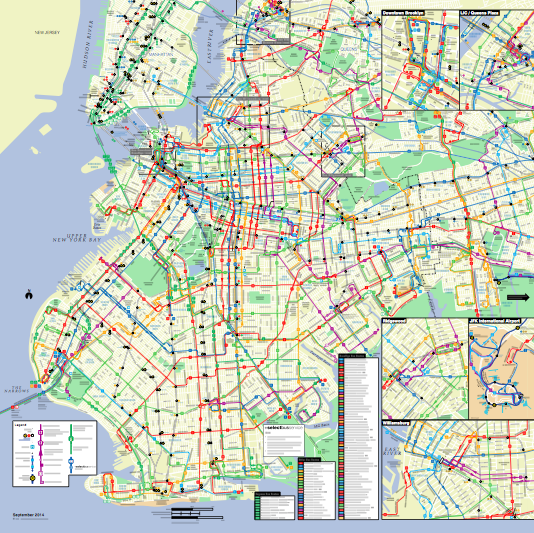 After your eyes stop bleeding from all the complexity, you might look at an inset for a quiet moment of respite. Unfortunately, the blown-up view of Downtown Brooklyn is just as offensive: 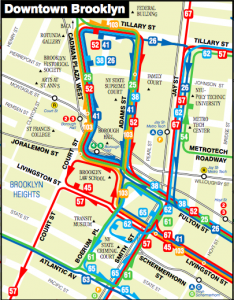 Once your eyes adjust, though, you realize buses go absolutely everywhere. At the very least you have plenty of intra-borough transit, and some sort of magical Bronx-Queens-Brooklyn connectivity (unlike the Manhattan-centric subway system – sorry, G train!). There must be tons of shortcuts and adventures hiding out in that rat’s nest, we just need to learn how to take advantage of all those route miles.

Now, the bus only makes sense when if the subway can’t get us there, or if it’s one of those secret bus routes that’s faster than taking the train. But how can we find those mysterious bus routes, or ideas about where to go? Do we sit around plugging addresses into TripPlanner, crossing our fingers and holding our breath and hoping that the pagan gods of transit will reveal their deepest secrets to us?

No, friends, I went ahead and made you a map.

Click where you live or enter an address and it’ll show you what happens if you started taking the bus in addition to the subway. The redder an area is, the faster travel it is to get there if you add those wheels into the mix. Even the yellow-green is at least fifteen minutes faster by bus (although you might start or end on the subway). You can also open it in a new window if you’re so inclined.

Neat, right? It  includes extras like the MTA Bus Company and Staten Island Ferry, and can even do comparisons with rail lines (LIRR and Metro North). It doesn’t include JFK’s AirTrain, but I hope we’ll be okay without it. All trip times are calculated from Tuesday, January 20, starting at 9AM, and I’ll hopefully have a tech breakdown posted soon enough (short version: MTA’s real-time GTFS file + OpenTripPlanner).

The big thing to note is that while it does Option A vs. Option B, it’s always displaying the coloring for the faster one, with the exception of Subway vs. Bus and Bus vs. Subway, where the order does matter.

While you really need to click around to get a feel for how bus-riding changes the feel of a borough, I’ve given you a roundup below of what’s what on a per-borough basis. Out of all them I’ve only ever lived in Brooklyn, so apologies that it’s the most detailed of the bunch! 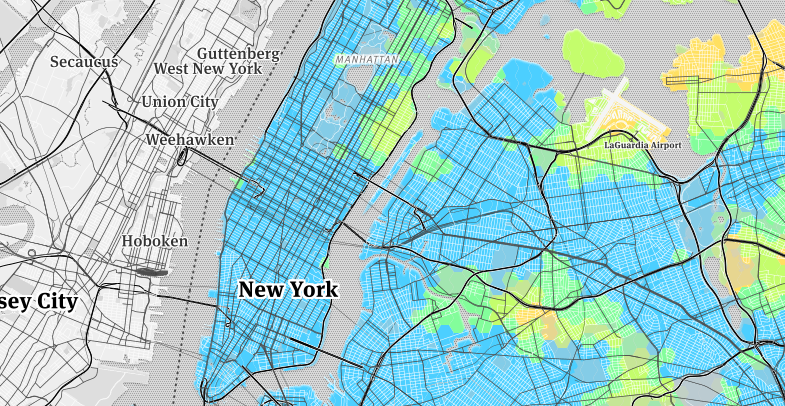 A little bit of Manhattan magic

If you live in Lower Manhattan, there’s really no reason to ever take a bus. Sometimes hopping on a crosstown is worth it, but it looks like walking wouldn’t be too much slower.

Once you get up to Central Park, though, buses are a lifeline between the Upper West Side and the Upper East Side. La Guardia also lights up as the single spot in Queens that’s faster by bus, thanks to the M60.

Once you hit the Bronx, things start to change. If you’re headed somewhere else in the borough, there’s about a 50% chance that you’ll have a faster time on the bus. Northeastern Queens (beginning at around Flushing) is also about half an hour more convenient.

Jackson Heights is faster by bus to Astoria and a bit of northern Manhattan.

Sunnyside connects to Williamsburg, Greenpoint, most everywhere south of Bushwick (down to Flatlands!).

Flushing is convenient to Ozone Park, Maspeth, and the western half of the Bronx.

In Brooklyn, west of Prospect Park is bus central

If you live around Dumbo, Brooklyn Heights, Cobble Hill or Carroll Gardens your best bets are Red Hook and South Williamsburg. You could also visit the Budweiser bottling plant in Maspeth, Queens (just the outside!).

Vinegar Hill and the Brooklyn Navy Yard are fun ones, with buses owning a large swath of territory from Greenpoint and Southwestern Queens to Prospect Heights and northern Bed Stuy.

Gowanus and Park Slope are remarkably subway-friendly, with the only subway shortcuts being to other parts of the Slope or Flatlands to the southwest.

Fort Greene and Clinton Hill residents can ride down to Bed Stuy or down to Flatbush or Flatlands.

Depending on where you are in Williamsburg, you’re a bus away from Long Island City, Sunnyside, Crown Heights, and Flashbush. Greenpoint is remarkably subway-friendly, although the western bits can bus over to Sunnyside or Jackson Heights.

From Bedford Stuyvesant you should take the train anywhere to the east or the west, but northern and southern routes are bus-riding gold (including Bushwick, South Williamsburg, Crown Heights, Flatbush, Flatlands, and Sheepshead Bay).

Crown Heights and Prospect Heights should bus it to Williamsburg, Bed Stuy, Flatlands, East Flatbush, Sheepshead Bay, and a few areas around Sunnyside.

Bensonhurst: Literally anywhere to the east and south of Prospect Park

Starting from Flatlands, you have to make your way up to Dumbo before it makes sense to take the train.

For Staten Island, buses beat the ferry nine times out of ten

It took forever to work Staten Island into the map! Turns out the ferry is run by the DOT and not the MTA, so it was always faster to take the express buses.

Once I added the ferry in… well, it looks like it’s generally a better decision to take the bus, but that might be a data processing issue. Since I computed all of this as if you’re leaving at 9am, you’ll need to wait until 9:30am for the very first ferry to leave! At some point I’ll do some massaging to even that one out.

But either way, who’s up for some Sri Lankan food? 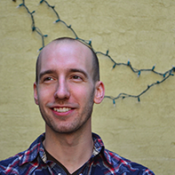 I’ve started a series called Data Work 101 over on the Lede Program site – I only have a couple posts up so far, but we’ll see…